We’re pleased to announce that we have partnered with local business, Bushah Luxury Coffee & Tea Company.

This partnership was made possible by our devoted volunteer and 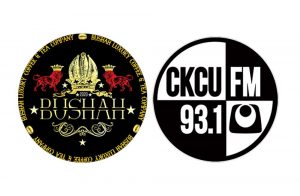 The concept is simple. For every bag of coffee sold, CKCU FM will receive $2 dollars. This will go a long way in keeping the Mighty 9.31 on the air while also supporting a great local business.

To support CKCU FM while purchasing your coffee, enter the promo code “FRIDAYDRIVE” and voila! We’d like to thank Bushah Luxury Coffee & Tea Company as well as Trevor Walker of Friday Drive for making this partnership a reality! 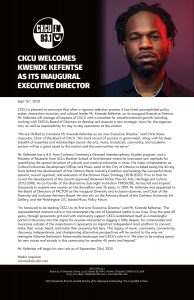 CKCU is pleased to announce that after a rigorous selection process it has hired accomplished policy maker, researcher, musician, and cultural leader Mr. Kwende Kefentse, as its inaugural Executive Director. Mr. Kefentse will manage all aspects of CKCU with a mandate for transformational growth including working with CKCU’s Board of Directors to develop and execute a new strategic vision for the organization, as well as responsibility for day to day operations at the station.

“We are thrilled to introduce Mr. Kwende Kefentse as our new Executive Director,” said Chris Ikonomopoulos, Chair of the Board of CKCU. “His track record of success in government, along with his deep breadth of expertise and relationships across the arts, music, broadcast, community, and academic sectors will be a great asset to the station and the communities we serve.”

Mr. Kefentse has a B.A. from Carleton University’s Directed Interdisciplinary Studies program, and a Masters of Research from UCL’s Bartlett School of Architecture where he innovated new methods for quantifying the spatial structure of cultural and creative industries in cities. His major achievements as Cultural Industries Development Officer and Music Lead at the City of Ottawa included being the driving force behind the development of the Ottawa Music Industry Coalition and leading the successful development, council approval, and execution of the Ottawa Music Strategy (2018-2020). Prior to that he co-led the development of the council-approved Renewed Action Plan for Arts, Heritage and Culture (2012-2018). As co-founder of the alternative club-night institution TIMEKODE, he has led and inspired thousands to explore new sounds on the dance floor over 15 years. In 2019, Mr. Kefentse was appointed to the Board of Directors of FACTOR as the inaugural Diversity and Inclusion observer, and Chair of the Diversity and Inclusion Advisory Board. He also sits on the Advisory Board of the Carleton University Art Gallery, and the Washington D.C. based Music Policy Forum.

“I’m honoured to be leading CKCU as its first ever Executive Director,” said Mr. Kwende Kefentse. “The unprecedented moment we’re in has recentered the role of broadcast media in our lives. Over the past 45 years, through grassroots grit and with community support CKCU established itself as a meaningful portal of discovery into the region for anyone interested in digging a little deeper. For communities and musicians outside of the mainstream it represents an important independent local platform to connect, make their voices heard, and make their presence felt here. This legacy of music, community, connectivity, discovery, independence, and championing alternative perspectives will be central to the way we reimagine Ottawa-Gatineau’s future media landscape and CKCU’s role in it. We plan to be making space for new voices and sounds in this community for another 45 years and beyond.”

It is with great sadness, that CKCU regrets to inform you of the passing of Janis Lockwood. On June 5, we lost a towering figure in the station’s 45-year history. Janis was here from early days, helping to pull a fledgling campus-based community radio station up by the roots.

Her on-air presence showed all of us how radio should be done. Her support for local artists showed many a musician that it could be done. Her ever-engaging “old school mix for music lovers who refuse to be confined by narrow categories” was the best of CKCU. Off-air, too, Janis represented the best of CKCU. More than a trusted volunteer and host, she was instrumental in keeping us going through times both good and bad. As funding drive coordinator. As a former member and chair of the Board of Directors. As a tireless advocate for the station and, during those bad times, the driving force behind a decisive effort to save us from ruin.

It is no exaggeration to suggest that CKCU owes its continuing presence on the airwaves, online and in our hearts to the dedication and determination of Janis Lockwood. More than a radio host; though, in that, too, she showed all of us the way. On behalf of the many who owe her a debt of gratitude, the Board of Directors sends condolences to Janis’s partner Fred, her family and to the many friends whose lives she touched. If you are reading this, you know that you are one. 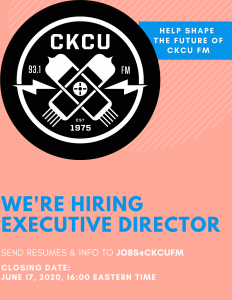 CKCU-FM is embarking on a transformative journey to ensure the long-term viability and sustainability of the organization. Operating for over 44-years beginning on November 14, 1975, we are looking forward to 2025 when CKCU-FM celebrates its 50th anniversary.  To get there, we are seeking to update our strategic path forward, improve our business structures and capture opportunities available in the evolving broadcast landscape.

If you believe that you are the person to lead this journey, submit your application or any questions & requests for additional information to:
Pat Moore Director
CKCU-FM Board of Directors
jobs@ckcufm.com