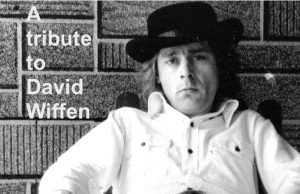 The Story Behind the Sept. 14th CKCU and CityFolk Tributes to David Wiffen

In the interview, David told some fascinating anecdotes about his artistic development, the many notable people he performed and recorded with (including Bruce Cockburn, Neville Wells, Colleen Peterson, Sandy Crawley and Richard Patterson), and the many notable people who recorded his songs (including Anne Murray, Harry Belafonte, The Byrds, Ian & Sylvia, Blackie and the Rodeo Kings, Jerry Jeff Walker, Eric Andersen, Tom Rush and The Cowboy Junkies).  The conversation was so intriguing and so connected to folk music history that Ray and Chris invited David to return for a two-hour special edition of ‘Canadian Spaces’ on Saturday, Sept. 14.  When he agreed, nine amazing musicians who are connected with him and love his songs accepted invitations to participate in the radio show:  Tom Wilson, Lynn Miles, Sneezy Waters, Neville Wells, Julie Corrigan, Sandy Crawley, Ray Harris, Frank Koller and Don Marcotte.  These musicians will be joining into the conversation with David and performing songs written by him or associated with him.

The planning activities associated with the Sept. 14th radio show caused a second event to materialize somewhat spontaneously:  a 90-minute musical tribute at CityFolk that evening!

* Sandy Crawley’s son Jonas Crawley will be bringing a video crew from Toronto to capture material for a full-length documentary he’s making about David.

* Bluesfest/CityFolk Director Mark Monahan will present the Helen Verger Award to David at the concert.

* A portrait of David Wiffen painted by Arthur II will be on display at the concert.

* Ray Harris will be playing a 1956 Gibson J-200 guitar he tracked down that used to belong to David.

*The 7:00 pm CityFolk tribute concert will be followed at 8:45 pm by a performance by Tom Wilson and his band (Lee Harvey Osmond).

Text for proposed “David Wiffen Day” proclamation by the City of Ottawa:
WHEREAS, Ottawa resident Mr. David Wiffen is one of Canada’s most respected songwriters and recording artists; and

WHEREAS, Mr. Wiffen was an integral part of ‘3s a Crowd’ and ‘The Children’, two Ottawa-based bands that had international impact; and

WHEREAS, Mr. Wiffen is being honoured on Saturday, September 14, 2019 with a two‑hour CKCU broadcast, a 90‑minute CityFolk concert, and the Helen Verger Award for his significant contributions to folk music; and

THEREFORE, I, Jim Watson, Mayor of the City of Ottawa, do hereby proclaim September 14, 2019 DAVID WIFFEN DAY in Ottawa.