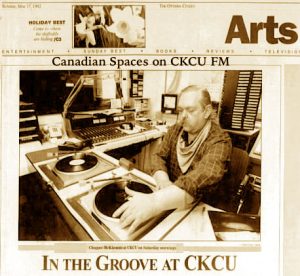 • Ottawa-based visual artist Arthur II (pronounced ‘two’) will be creating an original painting on camera in real time during the program as a tribute to the 40 years of amazing music and conversation the show has presented.

• Thunder Bay-based musician and videographer Chad Kirvan will be cooking a custom-designed ‘Canadian Spaces Breakfast’ live on camera during the show.  The breakfast will include a special ‘hot brown drink’ in reference to the famous phrase Chopper used for 33 years to introduce the ’40 minutes of uninterrupted folk’ that start each show

• To complement the live performances by the musicians, Ball & Chain (Michael Ball and Jody Benjamin) will be at the broadcast site in person to perform live at various points during the show.

Story In the Ottawa Citizen: https://ottawacitizen.com/entertainment/ckcu-folk-show-canadian-spaces-celebrates-40-years-on-the-air

Here it is the extended version on the CKCU YouTube channel: https://www.youtube.com/watch?v=zc_GNUNTrhI
…and of course CKCU On Demand  where you can still post a comment as well.