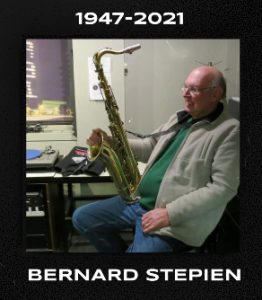 It is with great sadness that we announce the passing of Bernard Stepien. Bernard was a long time fixture at the station and in the local jazz scene where he was known for his virtuosic saxophone playing. After taking on Rabble Without A Cause in the 90’s he became part of the Sweetman / Émond / Stepien axis of Jazz on CKCU, which reigned for decades. Beyond his life in music he was a researcher and software engineer at the University of Ottawa contributing to that body of knowledge with several publications.

Local funeral services and commemorative jam sessions will be delayed until Ottawa is out of the COVID red-zone. At that time we’ll let everyone know how best to pay their respects. CKCU has been running a range of produced carts and best-of shows commemorating his work at the station over the next while, and will be making a gift to the family. He is survived by his son Thomas Stepien, who also broadcasted on CKCU as the well known DJ Teknobrat. Please keep his family in your thoughts.

Here is a link to an article by Peter Hum in the Ottawa Citizen:
https://ottawacitizen.com/entertainment/jazzblog/remembering-ottawas-bernard-stepien-renaissance-man-computer-scientist-jazz-saxophonist-and-broadcaster