We want to hear from you! Take the CKCU-FM Listener Survey!!
Go

It was August 12, 1995, and Junior Smith, host of CKCU-FM’s popular Saturday afternoon music program, “Reggae in the Fields,” put his reggae records aside. Instead, he devoted the full two and a half hours of his program to a panel discussion and call-in show. Smith’s in-studio guest that day was Ottawa-Carleton’s Chief of Police, Brian J. Ford. Before long, and to almost nobody’s surprise, they were talking about a man, Vincent Gardner, who died in hospital in the late autumn of 1991, six weeks after being felled and crippled by a police bullet.

Gardner’s death had enraged the community because the system was engaging in a cover-up, claiming that Mr. Gardner died of liver cancer and not the gunshot. This was finally put to rest five years after his death by a Coroner’s jury that rule death was due to the bullet.

But this was only one of many public affairs matters that were discussed over the years on Reggae in the Fields. And it was the only one that took up the full two and a half hours. For Reggae in the Fields was a music program based on the Jamaican music that was sweeping the world. 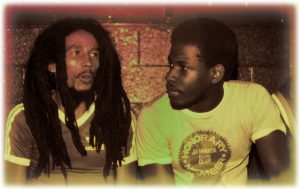 In the year 1976. Junior Smith was a young math student at Ottawa’s Carleton University when he discovered that Radio Carleton had opening for volunteers. It was, after all, a student-run entity and was open to just about anything that students wanted to do. And so he sought and obtained a one-hour space on a Saturday for a program based on reggae music.

Grounded in the music of Reggae King Bob Marley, the program sought to bring a wide variety of popular Jamaican music to listeners.

Shortly after the program began, the Counsellor at the Jamaica High Commission got word of it and contacted Junior Smith who invited him to assist. The result was seven programs featuring the historical rise of the music and the singers and musicians behind it. Since then, there have been several programs based on the history and the impact of the music.

Speaking of impact, as good as Marley’s music is, it is his lyrics that make the impact, with his persistent concern for equality, brotherhood, upfulness and righteousness.

On the occasions when Smith has had to be away others have filled in, notably DJ Karess who also for a few years prepared and presented a review of Caribbean news.

Nearly half a century later the program has grown to 2½ hours. Listeners around the world tune in each Saturday, sometimes sending in music from their homelands, but always contributing in one way or the other.

Indeed, Junior Smith has been central to promoting and maintaining Jamaican culture here in Ottawa with Reggae in the Fields. May it long continue.

(Ewart Walters is a journalist, author and former diplomat. Former Publisher and Editor of the defunct Black newspaper “The Spectrum”, he is a recipient of numerous  awards including the Order of Ottawa)