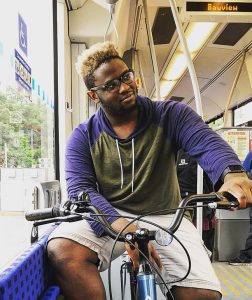 Meet Victor Ubaru one of this summer’s Radio Camp Counselors at CKCU!

Born in Benin City Nigeria, Victor is going into his last year as an Aerospace Engineering and Computer Science student here at Carleton University. He is a self-professed “hardcore nerd” who loved to read encyclopedias when he was younger and apparently had no friends, so lucky for the care and love of a giant family! At only 13, his father decided to move to Calgary which Victor describes as “less of a culture shock and more of a cultural electrocution”, and then eventually landed in Ottawa to study at Carleton.

Victor is an audio enthusiast who enjoys being creative; he does podcasting and has produced a few “wannabe rappers” along the way and appreciates the opportunities, freedom and space that CKCU provides… “Working with and around the people here I have learned a lot not just about the technical aspects of live audio production but also about how to bring people and ideas together like nothing before.”

Victor was introduced to CKCU by his favourite human being Selali Ayitey-Wallace, host of two radio shows on CKCU’s program The Take-Over and Love Lessons. Like Selali, Victor enjoys the emphasis on giving “a voice to the community in a way commercial radio just cannot. Because CKCU is not for profit it allows us the freedom to allow anyone who has something to say to speak up. It gives a platform to the ordinary man not yet corrupted by wealth or power, and lets the people in the community find and connect with other like minded people…”

Victor and his co-counselor Colin (Boudreault, who was “CKC-You profiled” earlier this year) are busy with an energetic group of Radio Camp Kids as we speak, and they encourage others to sign up ASAP. It is a fun, enriching and rewarding experience for kids 10-14 years to take part in… There are still spots available in all four weeks remaining, so DON’T DELAY!
https://www.ckcufm.com/radio-camp/